Sarantaporo.gr NPO in Geneva for IGF17

The 12th Internet Governance Forum (IGF17) was held this year in Geneva from December 18th - 21st, with the theme "Shaping Your Digital Future!". Sarantaporo.gr was there, invited by the US One World Connected to co-form the digital future with activists, civil society organizations, government and non-governmental organizations around the world.

The conference program was interactive, featuring 8 main events, 99 workshops and 45 open forums among many other discussions and meetings. The conference was attended by 2019 participants from 142 countries, while 1661 people followed it online from all over the world.

Some statistics on participation are shown in the following Chart. 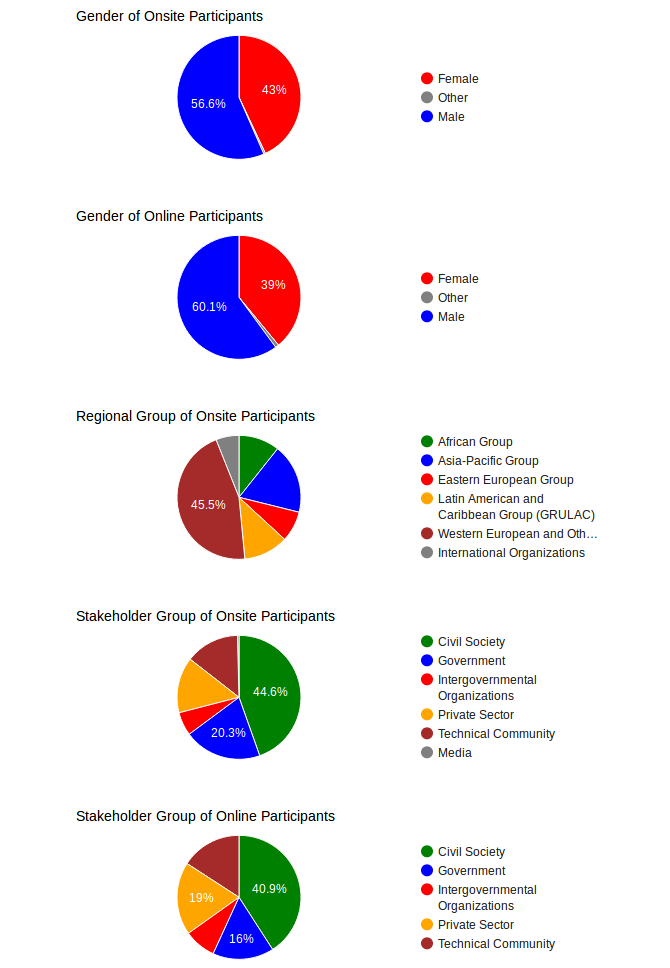 Sarantaporo.gr NPO participated in a panel titled: DC on Connecting the Unconnected, along with five other participants from a total of five continents. Vassilis Chrysos, a member of Sarantaporo.gr, was the only European representative. Other areas represented were the USA, India, Vanuatu, Kenya and Latin America.

One of the topics raised at quite a few conference panels was the dimension, the access to the internet takes, in the light of the local culture and local particularities of each region. Mr. Vassilis Chrysos contributed to this discussion by telling local stories of Sarantaporo.gr using the internet. From gaining access to online prescriptions to motivating grandchildren to visit the village, Sarantaporo.gr stories have shown that the lives of locals are upgraded and social cohesion in the area strengthened as a result of local intervention. group of active citizens.

As part of the conference, Sarantaporo.gr participated in the drafting of the Charter and the establishment of ISOC CNSIG, a worldwide community of community networks. As a key member of this collective, Sarantaporo.gr is beginning to work with active citizens around the world to spread the practice of community networks and exchange best practices and experiences. Building on the accumulated experience of its members, the CNSIG will work, inter alia, to draw up concrete proposals to government and other stakeholders on the formation of a favorable legal and institutional framework for the operation of Community networks worldwide.

Sarantaporo.gr's participation in IGF17 was funded by the Athens University of Economics and Business in the framework of the European netCommons research project.